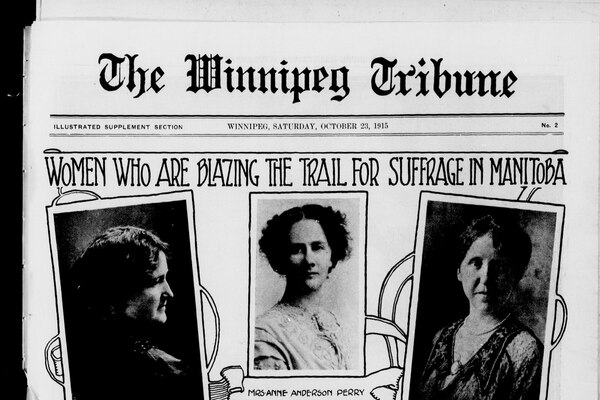 Welcome to Living Rights Then & Now: a MARL blog. The goal of this blog is to spread knowledge about the unique history of human rights struggle within the province of Manitoba, and the multiple struggles, victories, and challenges that have occurred here. Living Rights Then & Now will help enlighten Manitobans and anyone interested that the rights we enjoy did not arise out of nowhere, and that human rights abuses and issues remain within our province today.

In the 1910s, suffragettes all over the world were working hard for what was then considered to be a radical agenda: women’s right to vote. The first North Americans to win this right were the women of Manitoba, who successfully convinced the legislature to grant suffrage in 1916. Other provinces soon followed and by 1918, all Canadian women had won the right. The United States followed in 1920.

What made the conversations and arguments of Manitoban women successful where others failed? In addition to having a progressive legislature and articulate advocates, Manitoba had an edge other communities didn’t. Between 1870 and 1915, roughly a quarter of the Icelandic population, over 20,000 people, relocated to Manitoba. Icelandic women won the right to vote from their parliament in 1915. Acute awareness of this victory cast both light and urgency on Manitobans’ struggles for justice here.  At the same time, the suffragette struggle excluded women from many racialized and ethnically marginalized communities, many from Eastern European countries. Indigenous women (Status/First Nations/First Nations receiving an annuity from the crown) only received the right to vote provincially in 1952.

Manitoba continues to be a culturally diverse province. Many individuals who call Manitoba home are also global citizens, keeping up international connections and the perspectives and understandings that go along with them. Now as then, many of the struggles for rights and recognition we face in Manitoba have parallels in other parts of the world. At MARL, we hope to help celebrate and foster the potential of our community to offer unique and influential approaches to rights issues.