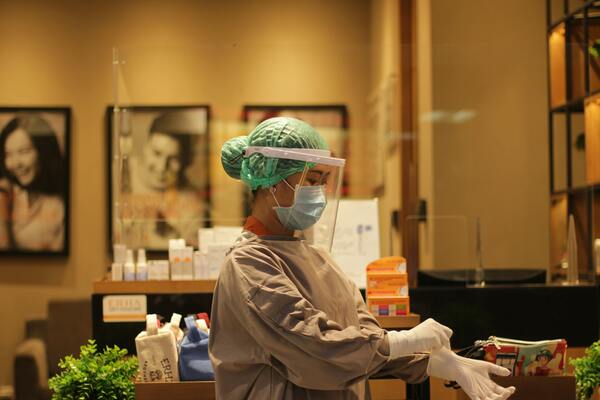 In Manitoba, the COVID-19 pandemic led to the implementation of The Emergency Measures Act, a rare and powerful legislation. Read to learn more!
27 Apr 2021
Education, Human Rights, Research

On its face, the Act is broken down into five parts: administration, emergency preparedness, emergency response, disaster assistance, and general provisions. Within the administration part, the Emergency Measures Organization (EMO) is established. The EMO is to be made up of a co-ordinator and an undetermined number of officers and employees (section 2(2)). Section 2.1 designates the organization as the catalyst of Manitoba’s emergency response system, tasking the EMO with overseeing, “all aspects of emergency preparedness in the province”. In order to carry out this task, section 2(3) outlines that the EMO is to work within the provincial government, alongside the other levels of government, and with the private sector to ensure that the province is able to respond to any type of emergency. Much like administration part, the emergency preparedness part of the Act concerns itself with preparing the Province for any kind of emergency. The difference between these two sections, however, is that the emergency preparedness part outlines the powers vested in the Lieutenant Governor in Council, an individual minister, or the local authorities to prepare for an emergency.

The next, and arguably the most relevant portion of the legislation is part III, emergency response. The reason that this piece of the legislation is so important is because it expands the power given to the minister, local authorities and the Lieutenant Governor in Council quite substantially. Section 12(1) and its subsections outline the expansion of power that is granted to both the minister and local authorities. For instance, subsection (g) allows the minister or a local authority to authorize the entry into any building or piece of land without a warrant. As well, section 12(6)(b) permits a Minister’s order, made under the Act, to prevail over any other act of the legislature if there is a conflict between the two. Furthermore, the Lieutenant Governor in Council is able to make a temporary suspension order under the authority of section 12.6(1). A temporary suspension order is, as section 12.6(1)(a) explains, “a provision which governs services, programs, benefits and compensation….” These orders are to trump any other piece of legislation that they may come into conflict with. This is expressed under the authority of section 12.11.

An example of this applying during the current pandemic can be found in Order in Council No. 330, which came into force on December 1, 2020. This order suspended clause 16(1)(d) of The Crown Corporations Governance and Accountability Act until at least March 31, 2021. Clause 16(1)(d) had stated that senior management at a Crown Corporation were required to hold at least one public meeting, each year, in three different areas of Manitoba. Now, under Order 330, a Crown Corporation is no longer mandated to hold a single public meeting. The Lieutenant Governor in Council was given authority to enact this order via the powers outlined in the aforementioned section 12.6(1).

Part IV of the Act, disaster assistance, outlines the roles and requirements for organizing disaster assistance loans and the repayment of monies handed out during the emergency. Notably, section 16 leaves the door open for the Government of Manitoba to call for repayment of some, or all, of the monies that the provincial government has given to a certain municipality. It will be interesting to see if the Government of Manitoba attempts to implement this after COVID has passed.

Lastly, part V contains the general provisions of The Emergency Measures Act. This area outlines the more legal aspects of the Act; that being the creation of provincial offences for contravening the act, the penalties for contravening and order made under the Act, and the exceptions to these offences. Subsections 20(1)(a), (b), and (c) outline the possible ways that someone can commit an offence under this act. This includes a failure to follow any order made under the authority of the Act; any interference or obstruction towards either “emergency infrastructure” or any person carrying out a duty conferred by the Act; and lastly, any contravention of the Act itself or its regulations.

It is interesting to point out that under section 20(1.2), a peace officer can make an arrest without having a warrant, if they witness a person “apparently” committing one of the offences outlined above. The subsections of section 20(1.2) further state that detention without a warrant is only permissible if making that arrest is necessary to either: establish that person’s identity, secure or preserve evidence relating to the offence; or prevent the continuation or repetition of that offence. While the Act does try to limit the power of arbitrary detention conveyed by section 20(1.2), there is no doubt that this is a broad power entrusted in peace officers.

Additionally, the penalties that are provided in section 20(2) for those that are found guilty of an offence under the Act are quite severe. An individual can be penalized with either a fine not exceeding $50,000, or imprisonment for a term not exceeding one year. For corporations, section 20(2.1) provides that the maximum fine that they can receive is $1,000,000. In spite of these stiff penalties, it is important to note that most of the public health orders that have been made so far—e.g., mandatory masks in all public places, stay at home orders, self-isolation orders, etc.—have been made under the authority of The Public Health Act. Therefore, those who break these public health orders could not be subject to the penalties outlined directly above.

As well, one cannot be found guilty of an offence under the Act in two circumstances. First, a person cannot be guilty of an offence under this Act when they have contravened an order made under the authority of the Act after it had been passed, but during the time when the order was made to apply retroactively (section 20(6)). Secondly, section 20(7) states that no one is to be found to have failed to comply with the Act if that person can establish that they took reasonable steps to avoid contravening any order made under the Act.