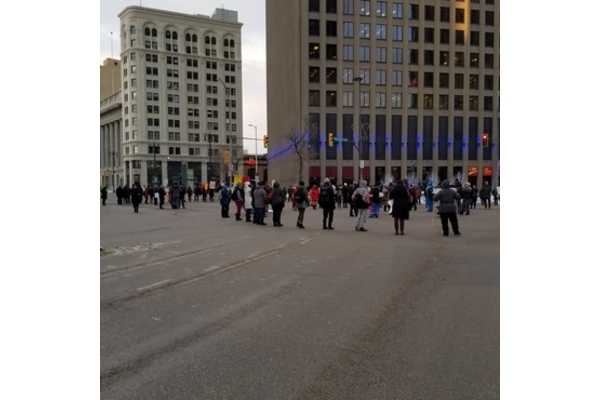 From time immemorial, members of the Wet’suwet’en First Nation have tended to their lands and since the arrival of settlers they have resisted colonial control over their home. Two camps have been built along a forestry road to assert sovereignty, gather community and resist colonial developments. The Unist’ot’en camp (est. 2009-10) exists fundamentally as a reoccupation of Indigenous lands and the main focus is healing. The Gidumt’en checkpoint (est. 2018) was created to oppose a pipeline being built on their territory. The Wet’suwet’en’s elected band councils, an electoral structure mandated by the Indian Act, have approved of the Coastal GasLink LNG pipeline. However, the hereditary chiefs of the Wet’suwet’en’s five clans never consented to the passage of the pipeline. Considering the potential harm to the lands and waters, the hereditary leaders and their supporters are opposed to the construction of the pipeline on their lands.

In December, the B.C. Supreme Court ruled giving the builders of the Coastal GasLink LNG pipeline an injunction so they could use the road unimpeded. The Canadian government has argued that the rule of law must be respected. This argument was used on Jan. 7, when the RCMP created a roadblock near the Gidumt’en checkpoint, prohibited access for media and members of the public, and arrested 14 people.

However, if we are to consider the rule of law, there are many more arguments in support of the five clans of the Wet’suwet’en.

Section 35. of the Constitution states: (1) The existing aboriginal and treaty rights of the aboriginal peoples of Canada are hereby recognized and affirmed.

“But, what are ‘aboriginal and treaty rights’?”

Lucky for us, they have been defined in the supreme courts cases R v. Calder and R v. Sparrow. In these cases, Aboriginal rights have been interpreted to include a range rights including the right to land, as well as to fish, to hunt and to practice one’s own culture.

“Why do these cases matter?”

2.  Most of what we now call British Columbia is actually unceded territory. Nations (including Canada) can only acquire sovereignty through means of

The Wet’suwet’en occupy the territory and have never transferred it, ceded it, or lost it in war/ conquest.

“So we know it’s their territory… but, is it legally Aboriginal Title?”

Many would affirm: You betcha'.

As lawyer Bruce McIvor states, these supreme court decisions outline that "the exclusive occupation of Indigenous lands is both a requirement to prove Aboriginal title and a right that flows from Aboriginal title”.

Under Canadian law, it would be easy to reaffirm that the Wet’suwet’en, who have occupied their lands from time immemorial, who have never ceded their territory or given consent to have it trespassed do indeed have sovereignty and aboriginal title which is indeed protected by the constitution.

“How about at the international level?”

4. United Nations Declaration on the Rights of Indigenous Peoples (UNDRIP)

From rights to self-determination and self-government to the right not to be forcibly removed from their lands or territories, many articles under UNDRIP are not currently being respected by the federal government.  Under UNDRIP, Indigenous peoples have the right to participate in decision-making in matters which would affect their rights, through representatives chosen by themselves in accordance with their own procedures. States also have the duty to consult with Indigenous peoples in order to obtain their free, prior and informed consent before adopting and implementing legislative or administrative measures that may affect them. These measures include the approval of any project affecting their lands or territories and other resources, particularly in connection with the development, utilization or exploitation of mineral, water or other resources. Most prominently, Indigenous peoples have the right to the lands, territories and resources which they have traditionally owned, occupied or otherwise used or acquired. That article includes the right to own, use, develop and control the lands that they tend to.

“But that UN stuff, it’s not legally binding is it?”

5. These actions taken against the camps and checkpoints are also in violation of Anuk Nu'at'en (Wet'suwet'en law).

“This is very unsettling; how can I help the Wet’suwet’en?”

A link to the Gidumt’en Support Guiding Principles:

A link to theWet'suwet'en Access Point on Gidumt'en Territory Go Fund Me:

A link to the Unist’ot’en Camp Legal Fund:

Solidarity Requests from the Unistoten Camp: