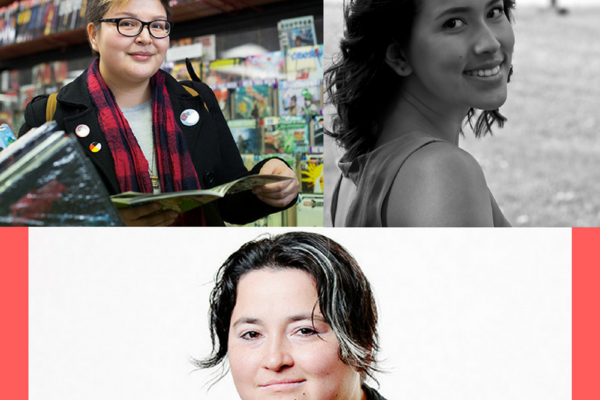 After an incredible line-up of four films from local/Canadian filmmakers, we will hear from two of the filmmakers, Sonya Ballantyne and Charlene Moore, during a panel moderated by Amanda Kindzierski.

Find out more about our panelists and moderator:

Sonya Ballantyne is a Cree filmmaker originally from Misipawistik Cree Nation in Northern Manitoba. Her tale-telling father and movie-loving mother raised Sonya with a wild imagination, a bizarre taste in movies, and a love of creating stories. Her films put Aboriginal girls and women in film genres where they are not traditionally included: horror, sci-fi, fantasy, and superhero films.

With a degree in Indigenous Studies and filmmaking, Charlene Moore is currently pursuing graduate studies. Combining her passions, Moore’s thesis is a documentary film that explores the cultural significance of moccasins. Charlene grew up in the heart of Winnipeg (downtown). She spent a lot of her childhood watching movies, creating art, and being outside. Charlene always had a passion for making things.

Amanda is a Polish, Ukrainian, Ojibwa, Cree multi media artist born and raised in Winnipeg Manitoba. A graduate of the Academy of Broadcasting and National Screen institute’s New Voices Film Program. A storyteller from childhood, I’m working to share my unique perspectives with a wide audience through art.