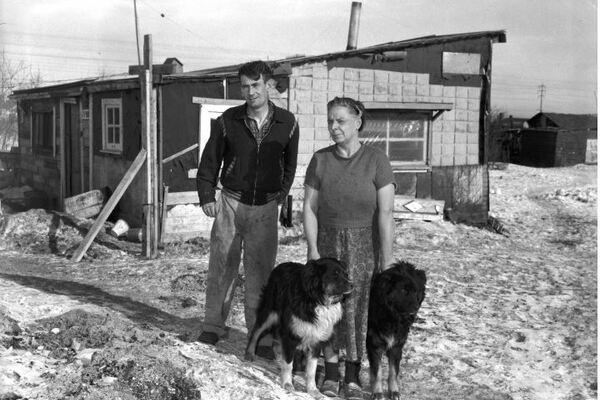 From the early 1900s-1960, what is now Pan Am Pool, Grant Park Mall and High School was home to a Métis settlement.
15 Nov 2018
Education, Human Rights, Research

Today, Winnipeg's Grant Avenue is a typical almost-suburban street, home to Grant Park Shopping Mall and some chain restaurants. A century ago, the landscape was incredibly different. From the early 1900s-1960, what is now Pan Am Pool, Grant Park Mall and High School was home to a Métis settlement.

The 1870 Manitoba Act had promised land to Métis people, which was never fulfilled. This forced Métis people to find new places to settle, as prairie land had been given to European settlers. There was a lack of low-income housing in the city at the time, which led to the settlement of ‘Rooster Town’. At first, the settlement existed near what is now Corydon Avenue, but the community was continually pushed further South to build higher income housing. More permanently, the community existed on what is now Grant Avenue. At its peak in the 1930s, Rooster Town spanned from Stafford Street to Lindsay Street.

Most families who lived in Rooster Town lived in poverty, and employment was hard to come by. Most men had precarious employment such as seasonal jobs or hard labour, and some women worked as cleaning ladies. Families lived on approximately $250/month, which between 1930-1960, would be anywhere between $2,500-$4,000/month in today’s dollar. During the first World War, many of the men in the community joined the army. This left their wives to care for large families with no income, as many of the women didn’t work. At the time, social assistance programs were not prevalent, and didn’t do much to help the families who lived in Rooster Town. It was commonly believed during the early 1900s and forward that those living in poverty were in certain circumstances as a result of personal fault. At the time, Rooster Town was portrayed in the media as a negative community. Residents were framed in dehumanizing terms, seen as wards of the city and costly to taxpayers. In 1944, a newspaper reported that Rooster Town was a “serious menace to the health and welfare of the city” (Peters et al, 2018).

There was no running water in the community, and residents had to walk a kilometer to the closest pump. One to two room homes were constructed from old railway boxcars, and housed anywhere between 12 and 24 people. Because of overcrowding, it was not uncommon for outbreaks of chicken pox, whooping cough, or skin disease to occur. Because the city limits during the 1930s ended at Grosvenor and Corydon, there were no bus services that ran near Rooster Town. This meant a decrease in accessibility to city services such as healthcare, affordable and healthy food, and clean water.

After WWII, Winnipeg began to become more suburbanized at a rate faster than any Canadian city at the time. Land just North of Rooster Town was cheap for developers, and new homes began to infringe on Rooster Town territory. In the late 1950’s, residents of Rooster Town were asked to leave their homes to make way for the construction of Grant Park Mall. Families were given $75 as incentive to vacate, approximately $640 in today’s dollar. Some residents had built homes in the area, and rented them out to families. The City’s actions not only took away housing and community, but a source of income from certain families. The City’s social services departments relocated families to the North End of Winnipeg, another low-income area. While the Rooster Town suffered from extreme poverty, there was a strong sense of kinship and community focused living. As well, it had been important to residents that they were surrounded by other Métis people to foster this sense of community and culture. The already dwindling existence of Métis culture was threatened once the City forced families to relocate in different areas of Winnipeg.

The existence of Rooster Town indicates a legacy of racialized poverty in Winnipeg, along with colonial patterns. Indigenous land has been taken without permission for centuries in Canada, pushing Indigenous populations out with insufficient compensation. Demolishing Rooster Town to make way amenities and services which benefit settler populations comes as no surprise taking our colonial history into consideration. Like all of Canada, Rooster Town is integral in our understanding of how settler colonialism has shaped our cities, provinces, and the nation.