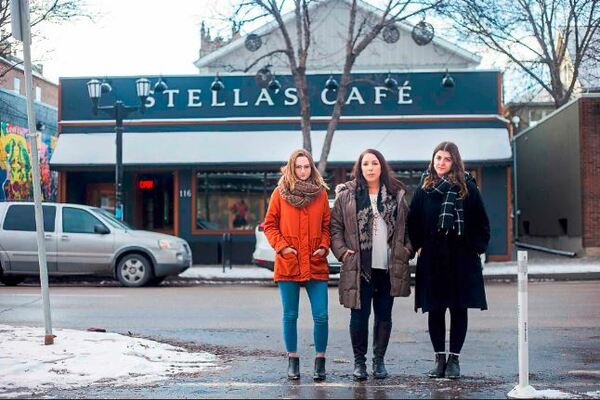 This past week, Winnipeg restaurant chain Stella’s has been criticized for harassment of employees.
16 Nov 2018
Human Rights

This past week, Winnipeg restaurant chain Stella’s has been criticized for harassment of employees. Current and past employees say that the management has created a toxic environment where sexual harassment is acceptable. Furthermore, many have spoken to unsafe work environments, where employees have been expected to work when sick. Unable to voice concerns to upper management due to fear of dismissal, employees have taken to social media. The Instagram account @notmystellas has gained over 12,000 followers in a week, with over 275 disclosures of unsafe and unfair work environments. In response to this, Stella’s released a statement last Friday, reiterating that they do not condone harassment or assault, but lacking in an apology to the employees impacted. Many past and current employees named Vice President Grant Anderson and Regional Manager Brad Burrows as perpetrators of harassment, and as a result the two have now been placed on indefinite leave of absences. This has encouraged other restaurants in Winnipeg to analyze their own policies and practices. NotmyStella’s has expressed that a leave of absence is not enough, and termination of Anderson and Burrows would be more appropriate. The group of former employees is also asking for a public apology from the company. As well, they are requesting that the company compensate employees for mental health services for those impacted by harassment or unfair policy. The group is also requesting the implementation of a human resources department for the company, which employs over 500 people.


Restaurants are no stranger to toxic work environments for women. In a 2016 investigation, CBC’s Marketplace took a closer look at the unrealistic and unfair standards female identifying servers experience. Chains such as Moxie’s, Earl’s and Joey’s all have strict dress codes for female servers, but not for male servers. While men are expected to wear black pants, dress shoes, and a button-down shirt, women are expected to wear more revealing clothing. Requirements include skirt length, heel height, amount of jewelry, and a “evening” makeup look. Women interviewed by CBC revealed that they would be forced to work long shifts in painful heels, leading to health problems. If women did not follow the dress code, they would either be sent home or managers would question whether or not they valued their job. Former employees of these restaurants feel that these unfair standards make for an environment which encourages and normalizes harassment of female employees by both coworkers and patrons.

In Manitoba, there are a few preventative measures taken to ensure the safety of employees. In the Manitoba Human Rights Code, there is a responsibility to take steps to ensure harassment does not occur, and to terminate individuals who engage in harassment. Under the Manitoba Health and Safety Act, employers are to disclose harassment reports and investigations if requested. There are no requirements that these incidents are to be taken seriously and in the best interest of the person impacted. Furthermore, the council has the power to create “measures that employers shall take to prevent harassment in the workplace”. According to Manitoba Employment Standards, employees are permitted to take a leave due to illness and not fear the loss of employment. As well, employers are allowed to have dress codes or uniforms, but there are no regulations relating to gender-specific dress codes. Furthermore, under this act, there are no standards regarding harassment and protocol. In any of the Manitoba codes and acts, there are no restrictions on upper management from gaslighting or manipulating employees emotionally, which can create toxic work environments and lead to mental health concerns.


For patrons, recognizing that boycotting spaces such as Stella’s is not necessarily the most effective, as many of their staff rely on tips and serving as a livelihood. It is important for customers to recognize that they have a role in this toxic culture as well, and have the responsibility to respect their servers regardless of their clothing or gender. As patrons, keeping companies accountable is key, as is supporting the voices of those impacted by harassment or unfair work conditions.